For your hilarity and enjoyment – The photo is me at the Winter Cross Country Series 8k on Sunday at the famous Stanky Creek crossing (courtesy of MRTC). Yes, I am always constantly screaming while I run. No, I am not completely insane.

Oh, SO…if you are thinking of trying to wear your water belt around your hips – Don’t. It is not going to work. With those water bottles filled the belt bounces 15 feet up in the air with each step. Very annoying. I didn’t even last 1 mile of my 16 mile run Saturday with it at the hips before I moved it up to my waist. BUT since I got a medium it is too big for my waist. Yeah…got to return another belt. My shipping department (Bobby) is starting to get grumpy

Also, the neon pink Go Belt arrived and only had 2 loops for Gu when it clearly said on the website, “NEW! Now with 4 loops!” Maybe I got an old one. The photos of the black one definitely show 4 loops – thinking I will return and get a black one. Or get something else. I need all 4 loops!

My current water belt is a freebie, given generously to me by Keshia last year. But it has a strap that is broken, isn’t the prettiest, and is really small. I can barely get it around the smallest part of my waist, so wearing it around my hips (where I really wanted it) isn’t even a consideration. 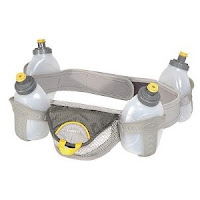 So I asked Bobby for a new water belt for Christmas. Unfortunately, I wasn’t paying attention when I sent him the Amazon link and asked for a Large Nathan Speed 4 Waist Pack with Four 10-Ounce Nutrition Flasks instead of a Small. Trying on the belt, it was just a little too big around my hips. That actually surprised me; I thought I would need a small. But later I tried on a Medium belt at the Fleet Feet store and it felt perfect.

Note to everyone: Unless you want to wear you water belt right at your natural waistline, order 1 size bigger. And listen, I don’t want to wear my belt around my hips just to look cool (well, maybe a little), but because when I wear my current belt at the waist it bounces so much and feels like it is pulling my shirt up and riding up to my boobs! 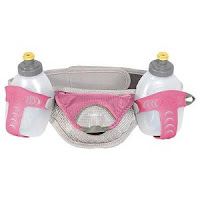 I have chosen the Nathan Speed 2 Waistpack with Two 10-Ounce Nutrition Flasks in Medium/Pink. Love the color! The pouch looks roomy, but not too big and reviews say it holds a Droid/iPhone, has a key ring and is even compartmentalized to keep icky used Gu packets separated. This one only has 2 10-ounce flasks, but I don’t see myself using all 4 anyway. Maybe if I’m running in the super hot summer. But my current belt only has 2 and I never thought, “Oh my God, I need more water!”. 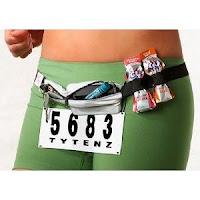 Being the smarty pants Amazon’s suggestion engine is, they said, “Hey pretty lady, why don’t you take a look at these GoBelts?” I said, “Amazon, how did you know I had been thinking about getting one of these for races when I don’t need water, but just something to carry Gu and my bib so that I don’t have to pin everything to my pants!?” Amazon tipped its hat and disappeared into the night. So I purchased a GoBelt in Neon Pink. The photo shows the silver version and yes, that is my stomach, I am a GoBelt model. It has slots for 4 Gus, straps to attach your bib, and a small pouch that is big enough for a Droid/iPhone. Perfect!

Now to sit by the front door until they arrive… 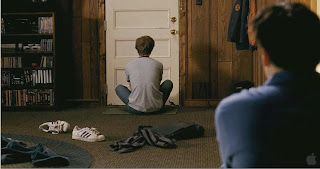