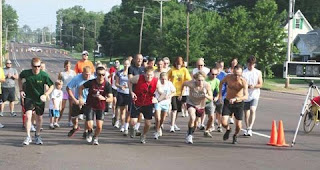 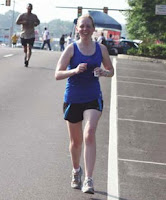 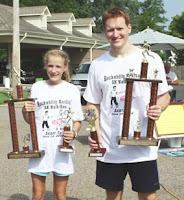 www.stjudemarathon.org
The countdown has already begun! (Check out the new countdown clock on the St. Jude Marathon home page that Bobby personally requested last year!
Online registration is now open – The sooner you register the more you save!
Yours truly has already been signed up by Mr. Bobby…for the full marathon!!! Eeeek! Will I be able to do it?

The race was so fun!
Uh, photographs would be nice…
You are a slowbutt. 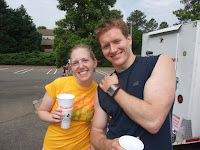 Bobby received first in his age group and 7th overall at the 2010 Youth Villages 5k Saturday.
And most important of all…
HE GOT UNDER A 20 MINUTE 5K TIME!!!
His time: 19:54.
He has been trying to do this for a long time and kept getting just over 20 minutes. On the treadmill he could get it, but in a real 5k he couldn’t…until Saturday.
SO PROUD!

Photographs from the Bunny Run 5k have been posted:

Have you signed up the Youth Villages 5k yet? It’s only the 5k that started it all (for me) and is one of the best in Memphis!

You say you haven’t signed up yet?! Then consider joining team Keller Williams Memphis East and helping us reach our goal for the kids of Youth Villages. Realtor Carrie McCaskill Smith is our team captain (the Youth Villages 5k is sponsored by the Memphis Area Association of Realtors).

The race is in East Memphis, starting at the Ridgeway Center and going through some nice neighborhoods. It is a big race with lots of hot dogs, chips, beer and a band afterward.

This will be my 3rd year in the Youth Villages 5k!

You couldn’t have had better weather for the Bunny Run this Saturday!

Bobby and I got there a little later than we would have liked. Went to get our shirts. Again, hate to complain, but…out of adult smalls…again. Haha, second race in a row. We are really going to have to start picking up our packets the day before if it is an option or getting there super early. Or please, race directors, order more smalls – Obviously it is an issue. But worked out pretty well because the youth large fit nicely.

I ran the shirts back to the truck. No race numbers at this race, which surprised me because there were a tons of folks there – over 700! Tried to find Ashley at the start, but too crowded.

During the first mile on Perkins a guy passed me who looked familiar from the back. “That guy kinda looks like Brett!” I thought, “Nah, his hair is way too long”. I’d find out it was him when I got to the finish line – Doh!

I was going pretty fast for me – the same pace as the Daffodil Dash 3 miler, at which I’d done really well (but didn’t could as a PR since it was only 3 miles). After reaching mile 2 I was getting tired. I’d stayed up late the night before and my stomach felt a little blergh. I was on Southern, just before mile 3, and I considered walking. I was facing the sun, had forgotten my sunglasses and just didn’t feel that great. I was almost at the end, but I hadn’t seen that “Mile 3” sign yet. Then I saw Bobby walking back from the finish line and cheering me on. “I can’t start walking now!” I thought. I knew I was close too if Bobby was walking back. Shortly I saw the 3 mile sign and was able to pick up the pace just a little bit. I finished at 26:59, beating my old 5k PR of 29:07 by leaps and bounds.

Saw James and Brett at the finish line (Keshia had to work that day). Ashley finished shortly thereafter with a new PR herself – yay! We walked over and ate these amazing things that looked like corn dogs, except had a sausage in the middle instead called “Pancake-On-A-Stick”. The Bunny Run had the best breakfast food ever at a race and is now in the running for best food at a race. 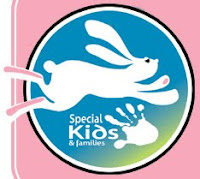 Bobby and I are signed up for the Bunny Run 5k this Saturday, April 3 at 9am.

At the Daffodil Dash we saw folks with flower petal headbands – who will we see with bunny ears?

A great family event including children’s games, face painting, Easter egg hunt, a visit from the Easter Bunny, and great food and prizes – Fun for the whole family, so bring the kiddies!