We arrived in New Orleans on Friday afternoon after a 6-hour car ride with Keshia and James. It actually went by pretty quick. Originally we were going to rent a minivan and have more with us, but Brett had to leave later and Allison decided not to go.

Our hotel was the Holiday Inn Westbank. Awesome that it was newly renovated and cheap, but not so awesome that the nearby interstate was quite loud. Probably won’t stay there next time (but the authentic 1950’s coffee shop 2 buildings down was a kick).

The first restaurant our tour guide Nathan took us to was Lola’s – A small Spanish restaurant at 3312 Esplanade Avenue. You can bring your own wine (or even beer as Pam and Patrick did). Their sangria was great. This was the first restaurant of many in NOLA were we discovered “The Curse of No Splitting Up of Checks”. Guess what’s hard? Doing math after sangria – Yarg!

Afterwards we traveled to DBA on 618 Frenchman Street to hear the “Pirate Band” as Cassie called them. I think they were Russian? Whatever they were, there was a stand up bass (which the singer actually stood up on at one point) and an accordion involved. Next was LaFitte’s at 941 Bourbon Street – one of the oldest bars in the United States. Patrick was “so kind” to treat us all to Jagerbombs – one of the oldest drinks in the United States (Wait, I may have to get my fact checker on that). The rest of the night was spent wandering down Bourbon where Patrick was “so kind” again and treated us all to Hand Grenades (which I’ve always had every time I’ve been to NOLA). Hmmm…Bombs and Grendades? I see a theme here…

Saturday we recouped by going to Mother’s at 401 Poydras Street for a late breakfast. Long wait for this place. We’d tried to go on previous trips but had been scared off by the long line. It actually moved quite fast. Getting food was a little strange: You wait in line inside like a deli to order and then seat yourself where ever you can get a spot (usually hovering over someone busing a table). But we kept wondering, “How are they going to know where to bring our food?!”. Well, someone comes up to you after you snag a seat and you give them your receipt. Food was pretty good, coffee was my fav (zero bitterness). Honestly not sure if it was worth the wait and crazy seating arrangement though. 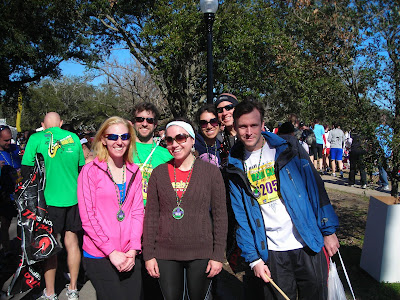 The Expo at the Convention Center was next. By this point I realized the shoes I’d picked out to walk around it weren’t as comfortable as I’d thought. Blisters on both pinky toes had formed – Argh! But the expo was the coolest I’d been too: tons of vendors, games, giveaways. Finally got a Hippee Runner belt with the correct 4 loops and in a cool shade of pinkish-coral. I should have ragged the guy about my defunct 2 loop belt I got from them off of Amazon (which I have yet to return – yikes – need to do that).

Pre-race dinner was some amazing sushi at Ninja at 8433 Oak Street. I could’ve eaten 4 bowls of their seaweed salad. The Swamp Roll even featured some marinated seaweed draped on top of it. Bobby ordered the spicy Volcano Roll and was treated to a giant plate of sushi, piled high in a volcano shape. It was covered with so many delicious crispies and chili sauce, we wondered if there actually was any sushi underneath. But the award for spiciest roll goes to the Devil’s Roll, ordered by Brett. Tears of joy (pain? anger? love?) rolled down his cheeks. Bobby confirmed it was the spiciest ever and filled with wasabi.

After a dinner that was probably too long, we convoyed and parked Nathan’s car near the finish of the race so we would have a ride back the next day. This was a fantastic idea, and I highly advise it (just make sure not to park in one of the many tow-away zones on race day).

We drove back to the hotel and snuggled into bed, exhausted, a little later than we wanted (11:00pm I think?) but excited for the race tomorrow!