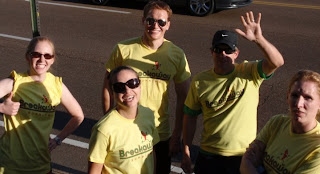 First, all 100+ of us (big group!) met at the Breakaway Running store in Midtown on Union & Rembert at 6:00pm. Bobby and I got there at 5:30 since we came straight from work (and we wanted to make sure we got a FREE commemorative t-shirt before they ran out – Bobby didn’t at St. Patrick’s).

After all had arrived and most got their shirt (softest t-shirts ever!) we took a group photo. Then we made our first stop right across the street: The charity drive-through WMC-TV was having for flood victims. Camera crews were there and filmed us as we ran by. Some of us near the back of the pack and we were asked to stay behind to be on TV for a live segment! After 15 minutes Jarvis Greer interviewed Mel Baddorf while we stood behind him. I later got a text from friend JudiAnn that she recognized me, haha.

After that we were off and trying to catch up to everyone else. We arrived at a very packed Café Ole in Cooper/Young. Michael did the smart thing and got a drink at The Beauty Shop across the street.

After that it was a very short jog to the fitness club down the street. Then it was off to Molly’s on Madison in Overton Square. We could tell it was packed before we got in, so several of us opted for the Blue Monkey next door for our drinks – not Mexican, but hey, we were thirsty!